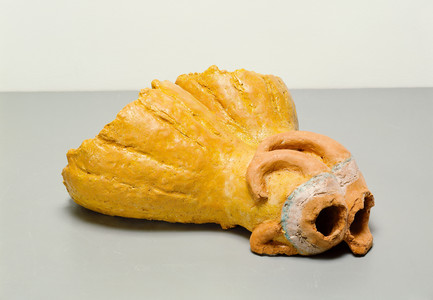 James Harris Gallery is pleased to announce the special exhibition celebrating 20 years of James Harris Gallery in Seattle! In this show, we will be selecting 20 artists who have a history with the gallery and have made significant contributions to the art world at large. We are proud of these artists as well as thankful that we have been able to support them and many others over the past two decades!

Brazilian artist Efrain Almeida first solo exhibition in the US was in our inaugural year. His work is now in the collection of MOMA as well as other institutions around the world. Squeak Carnwath also joined our opening roster and was recently the 2019 recipient of the Lee Krasner award for a lifetime of artistic achievement. Noah Davis passed away in 2015, but the power of his work lives on. He became a significant art world presence over a short career - his work has appeared in multiple institutional collections. Viola Frey works are included in the collections of the Los Angeles County Museum of Art, the Smithsonian American Art Museum in Washington, D.C., and the Metropolitan Museum of Art in New York, among numerous others worldwide. Gary Hill is regarded as one of the foundational artists of media/sculpture. His work will be included in a special project titled There is a Beginning in the Endduring the 58th Venice Biennale Venice. Leiko Ikemura work is in the collections of the Centre Pompidou in Paris, the National Museum of Modern Art in Tokyo, the Künstmuseum Basel, and the Museum Künste Palast in Düsseldorf, among others. Currently on view at the Künstmuseum Basel is a traveling retrospective entitled "Toward New Seas." Rashid Johnson's work has been exhibited at the Art Institute of Chicago; the Whitney Museum of American Art, New York; the Detroit Institute of Arts; the Walker Art Center, Minneapolis; the Corcoran Museum of Art, Washington D.C.; the Institute of Contemporary Photography, New York; the Brooklyn Museum of Art, New York; the Wadsworth Athenaeum Museum of Art, Hartford, Connecticut; the Renaissance Society at the University of Chicago; and the Rubell Family Collection, Miami, among others. Fay Jones received the Joan Mitchell Painters and Sculptors grant in 2013. Her work is in the collections of the Portland Art Museum and the Hallie Ford Museum of Art in Oregon, and the Seattle Art Museum and the Tacoma Art Museum in Washington. Alexander Kroll has had exhibitions in Europe and across the United States. Recently MoCA in Los Angeles acquired one of Kroll's paintings. Cameron Martin's work is held in the collections of Albright Knox Art Gallery, Buffalo, NY, Cleveland Museum of Art, OH, Henry Art Gallery, Seattle, WA, Minneapolis Institute of Art, MN, Philbrook Museum, Tulsa, OK, Saint Louis Art Museum, MO, Seattle Art Museum, WA, University of Wisconsin, Madison, WI, Whitney Museum of American Art, New York, NY among others. He will have a two-person show at Sikkema Jenkins in NYC this fall. Daniel J Martinez has work in the collections of the Whitney Museum of American Art, Museum of Modern Art, Museum of Contemporary Art, Los Angeles County Museum of Art among others. In 2019, he was awarded a Guggenheim Fellowship. Mark McKnight joined the gallery last year. He is the recipient of the 2019 Aperture Portfolio Prize. This prize comes with a series of images published in the Aperture magazine along with a solo exhibition at the foundation. Mohau Modesikeng represented South Africa in the 2017 Venice Biennale. He has exhibited at Dak'Art Biennale, Dakar (2012); and Focus 11, Basel (2011). Since graduating from Yale in 2012, Evan Nesbit has had a bright international career. He has multiple dealers in the US, from LA to NYC, Koki Arts in Tokyo, and Weiss Berlin. We are proud to represent him in the Pacific Northwest. Mary Ann Peters has worked nationally and internationally for over 30 years, and was recently included in Portland Art Museum's Biennial exhibition in which a work was acquired by the institution. Richard Rezac work was paired with the futurist artist Giacomo Balla in Milan. He just joined the prestigious New York gallery Luring Augustine. Stephanie Syjuco was one of our first artists. Her work was featured in MOMA's New Photography show in 2018. She has been exhibited widely, including at MoMA/P.S.1, the Whitney Museum of American Art, The San Francisco Museum of Modern Art, ZKM Center for Art and Technology, the California Biennial at the Orange County Museum of Art, The 12th Havana Bienal, The 2015 Asian Art Biennial (Taiwan), among others. Akio Takamori's work is included in numerous collections including the Nelson-Atkins Museum of Art in Kansas City, Los Angels County Museum of Art, Victoria & Albert Museum in London, Ariana Museum in Geneva, the Seattle Art Museum, and the Museum of Arts and Design in New York City. He will have a solo exhibition titled "The Passenger" at Otterbein College this fall. Bing Wright's photographs can be found in several museums collections including The Museum of Modern Art and the Seattle Art Museum. He has had recent exhibitions at Paula Cooper in NY and Lora Reynolds in Austin. Amir Zaki is one of our artists we have worked with since graduating UCLA in 1999. A monograph of his new series of photographs will be published by Merrill in September.