Leiko Ikemura. Before Thunder, After Dark 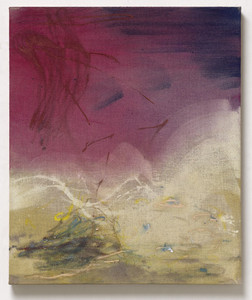 BUILDING presents Before Thunder, After Dark, the first solo exhibition by Japanese – Swiss artist Leiko Ikemurato be held in Italy, curated by Frank Boehm. On view from September 4thto December 23rd, 2021, the project is a broad overview of the work of Ikemura and gathers a selection of 50 artworks realized between the 1980s until today. The exhibition, which unfolds through the gallery’s four floors, presents a number of highly significant historical pieces to the public for the very first time, along with more recent works specifically created for BUILDING. Among these, a glass sculpture that was produced in collaboration with some of Venice’s oldest, most important glassworks.

Leiko Ikemura’s oeuvre is characterized by a complex, haunting visual language. In her works, initially mostly figurative and, in recent years, increasingly abstract, she focuses on humanity and its position in the universe. Female figures, a recurring motif in her work, are mostly portrayed free of any spatial context, set in semi-abstract landscapes that are more emotional than physical in nature. They are the protagonists of timeless images that focus on the contemporary visual perception of the human figure, expressing a personal representation of existential states. Viewing them is an intimate experience that conveys a longing for wholeness.

Ikemura’s expressive universe ranges from drawing to watercolor, painting to photography. She creates sculptures primarily in terracotta, bronze and, more recently, also in glass. The individual pieces are highly autonomous, and even the small formats exert a strong presence. In the various areas of BUILDING the works are installed in thematic groups that trace the development of the artist’s visual vocabulary, starting with a group of large-format charcoal drawings of the 1980s, shown here for the first time, through the delicate and nuanced shades characterizing the works from the 1990s, to the intense, bright colors of the most recent canvases.

On the ground floor the viewer is welcomed by the two large paintings Before Thunder (2014-17) and After Dark (2014-17), which have inspired the title of the exhibition, pointing to a fundamental condition of becoming and constant transformation in Ikemura’s work. In the silence of a livid and rarefied atmosphere, the blurred outlines of the figures in the foreground seem to merge with the surrounding landscape, radiating a suffused spirituality. Alongside these paintings, we find the imposing pastel drawing Ohne Titel, made in 1983 during a one-year residency in Nuremberg. This piece, highly exemplary of the artist’s earliestproduction, is exceptionally exhibited at BUILDING for the first time in thirty years. The recurring theme of the reclining girl, extensively investigated by the artist through various media, is expressed in sculptural form by the bronze Sleeping Figure in Red (1997-2012) and Lying in Yellow Dress (1997-2008) which, in their placid solitude, communicate all the complexity and inner fragility of the female figure.

The first floor houses a choral composition of bronzes and terracotta works, arranged against a colored background, recalling a theatre setting. The viewer’s gaze thus opens towards a complex world of hybrid, grotesquecreatures, with unusual yet incredibly familiar features, inspired as much by Japanese mythology as by the fantastic figures that adorn the Medieval Christian churches and cathedrals. Ikemura approaches the medium of sculpture at the end of the 1980s, working with clay for the first time in 1987. The irregular surface of her biomorphic creations embodies the artist’s modelling gesture, which transforms the rough, shapeless matter into unprecedented and heterogeneous forms, where memory mixes with dreams and imagination.

The exhibition continues on the second floor with a series of drawings on paper, inspired by her travels to Mexico. The artist’s visual language is expressed in a more direct and immediate way through the thick and soft line of the charcoal, which develops into rapid, nervous strokes and dark, smoky spots, from which emerges ghostly apparitions and impalpable visions of a mysterious world.

Belonging to the most recent production, the canvases arranged on the third floor offer a privileged point of view on the more abstract aspects of Ikemura’s work. In paintings such as A Bit of Blue (2019), CRN Act(2020) and New Horizon (2019), the narrative leaves room for chromatic intensity and calm lyricism, like the soft light of its cosmic atmospheres.

Lastly, the exhibition also includes a glass sculpture created specifically for the occasion. This precious addition to the exhibition sprang from the collaboration between BUILDING and the Venetian artistic glassmaker Berengo Studio on the occasion of the curatorial cycle hosted a year ago at BUILDINGBOX, entitled From Sand – Artworks in Glass.