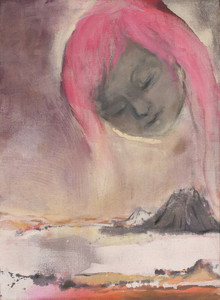 That the sky is so endless

This exhibit marks a new phase in Ikemura’s artistic evolution: cuncurrently with the Kunstmuseum Basel’s 30-year retrospective of her work, That the sky is so big is a demonstration of both Ikemura’s past artistic researches as well as a striking new phase in her painting and sculpture. This exhibit is a poetic commentary on the human perception of the cosmos. The images of the horizon, similar to a leitmotif, draw through the artist’s work. On the one hand, they are transformed into a new form of abstraction and, on the other, they open the viewer up to further freedom of imagination through their depth. The almost exclusively red and pink tones used to represent the recurrent image of the cloud can be interpreted as scenic elements); the series resembles a sensorial fireworks display, while simultaneously evoking the mysterious effect of Sfumato.The source of Ikemura’s inspiration can be found in her curriculum vitae: Born in Tsu, Japan, she studied Spanish Literature at the University of Osaka before emigrating to Spain in 1972. From 1973 to 1978, she devoted herself to the study of painting at the Academy of Fine Arts in Seville. After moving to Switzerland, Ikemura left her mark on the Zurich art scene of the early 1980s.