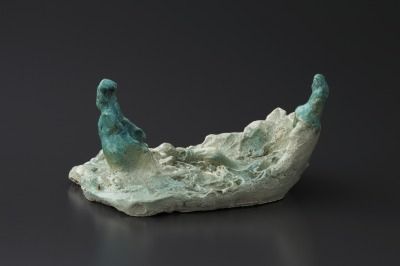 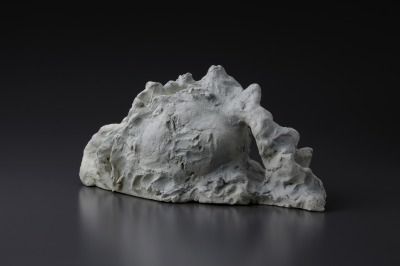 The Kenji Taki Gallery presents "mindscape",
a solo exhibition by Japanese artist Leiko Ikemura for the first time in Nagoya for ten years. The show presents works from the last five years, focussing on sculpture and including some in Shigaraki produced sculptures as well as new landscape paintings and drawings.

In Japan in particular, the landscape as lyrical metaphor gave expression to human emotions such as love, yearning and sorrow through poetic images of nature in the four seasons. It is a main topic in Ikemura's work now for more than five years, to be found in her larger paintings („Isola“) as well as in her delicate pastell drawings and monotypes. Her landscapes become anthropomorphized and exude a touch of uncanniness sometimes, while human forms mix with animals or plants. Especially trees become a metaphor of the human being, reflecting moods and relationships.
After the catastrophe of Fukushima, Ikemura concerns herself with the transitory of life, on display with „Bone Flower“ as a memento mori and the „Shigaraki mono bust“, which seem to express suffering. According to the artist, humanity today has reached a point of inflection. A latent sense of threat is prevailing. For Ikemura this raises the question: how can an artist assert herself in these times of globalisation, wars and mass migration?
Ikemura’s courageously nature, which has enabled her to lead an independent life as a woman far away from her home, unfolds renewed energy in her series Amazonas of 2015. It consists of monotypes on Japanese paper of nameless, ancient, female warriors – the Amazons. These women carry swords and yet seem naked and vulnerable in their tight outfits. Moreover, they are ghostly, shadowy apparitions that embody inner strength rather than external pugnacity.

Born in Tsu Japan, Leiko Ikemura has lived in Europe for more than forty years. After completing language studies at the University of Osaka and after spending seven years in Spain where she studied art, she moved to Switzerland where she obtained citizenship. Since 1985, she has lived and worked in Cologne and Berlin, and has taught at the School of Fine Arts in Berlin from 1991 to 2015. The internationally recognised work of Leiko Ikemura has been exhibited in prestigious museums and is part of numerous private and public collections such as the Haus am Waldsee, Berlin, (2016), Museum für Ostasiatische Kunst Cologne (2015), The Vangi Sculpture Garden Museum (2014), Staatliche Kunsthalle Karlsruhe Germany (2013), The National Museum of Modern Art, Tokyo / Mie Prefectural Art Museum, Tsu, (2011/2012). She was awarded the Cologne Fine Art Prize in 2014.