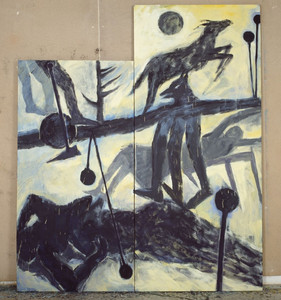 In the late 1970s and early 1980s, a new phenomenon in painting emerged on the German art scene: large-format canvas works, figurative portrayals and boisterous use of color. These mostly young painters presented a "rich world of motifs, oscillating between direct wit and a relish for provocation". A stark contrast to the prevailing art movements of the time, such as minimal or conceptual art. The term 'Neue Wilde' (New Savages) was first used by German art historian and museum director Wolfgang Becker to bracket together a number of international artists in his 1980 exhibition Les Nouveaux Fauves — Die neuen Wilden at the Ludwig Collection's gallery in Aachen. The exhibition's title directly referred to what is probably the most famous historical 'wild' painters' association: the 'fauves' (wild beasts). That group, surrounding Henri Matisse and Andre Derain, had shocked the Parisian public with their paintings shortly after 1900. For exhibition organizer Becker, the art-historical context seemed to be expressionism, in an extended sense, with roots in Germany and France.

One important feature of this loose stylistic movement was its early geographical fragmentation, with a multitude of protagonists. Becker had already exhibited such artists from both Europe (France and Germany) and the USA in Aachen. In Germany alone, there were hubs in Berlin (Rainer Fetting, Helmut Middendorf, Salomé, Bernd Zimmer), Dresden (A. R. Penck), Düsseldorf (Albert Oehlen, Martin Kippenberger), Cologne (Walter Dahn, Jiri Georg Dokoupil, Leiko lkemura) and other cities. There were also painters adopting this new style in Austria and Switzerland (Martin Disler). "The term 'Neue Wilde'," writes art historian Benjamin Dodenhoff, "was a rather vague and always controversial way of describing a number of artists who were perceived by the public as a kind of movement, without seeing themselves as a coherent group." Perhaps what they had most in common was an "expressivity tending toward pathos." Regardless of whether or not they were cohesive, homogeneous or heterogeneous, the 'Neue Wilde' opened up the domain of painting at the startof the 1980s, presenting unexpected and radical proposals. Boosted by its early institutional appearance in Aachen and with the tailwind of the mass media behind it, the movement established itself.

Jean-Christophe Ammann had left Kunstmuseum Lucerne for the gallery Kunsthalle Basel in 1978. In Lucerne, he had made a name for himself as an exhibition organizer, with a program that successfully presented, and sometimes interlinked, local, national and international trends. With his program, he primarily sought artistic quality, which in his opinion, as Annemarie Monteil writes, was conveyed "in, among other things, the sum of the 'energy' that a creative work must possess". On coming to Kunsthalle Basel, which had been structurally well renovated at his suggestion, Ammann immediately set about continuing the exhibition program that he had successfully introduced in Lucerne, adapting it to Basel's different circumstances. This new curator was close to the action, not only locally, but also in the rest of Switzerland and abroad.

It is therefore hardly surprising that people in Basel found out "early on about the German heavyweights" and Ammann brought them together in the 1982 exhibition 12 Artists from Germany. In the newspaper Neue Zürcher Zeitung, the exhibition was met with anything but enthusiasm: "What unites the artists is more noticeable than what separates one from the other. In what they paint and in the way they paint it, the [...] twelve Germans come across like conspirators; as outsiders in society, as freaks within the artists' community and within art history, they have nested in the underground, in the subculture of our civilization; there, they howl out their otherness with wolfish directness, not so much from the head as from the depths of the belly and abdomen." This journalist was evidently venting his incomprehension of the painters invited by Ammann. The new painting style revealed its full vitality in the exhibition and also attracted the public: In just over a month, almost 7000 visitors came. In the skylight hall at Kunsthalle Basel, the Cologne collective 'Mulheimer Freiheit' (Dokoupil, Dahn and Peter Bommels) presented an impressive eponymous visual installation. Ammann continued his exploration of German figurative (and wild) painting in the subsequent years, with solo exhibitions on Georg Baselitz (1985), Walter Dahn (1986) and Rainer Fetting (1987), and by showing Anselm Kiefer's work in a 1986 group exhibition.

In addition, Ammann always took into account and promoted the local artscene in Basel, where he found painters interpreting this 'Neue Wilde' movement in their own way. He helped some of them achieve their artistic breakthrough with exhibitions at Kunsthalle Basel, one example being Basel-born Niklaus Hasenböhler, whose 1985 presentation was described as follows by Basel painter Werner von Mutzenbecher: "Niggi had boldly hung his paintings of equal size in one row on the long wall. The rest of the hall was empty: an impertinence beyond compare! But in so doing, he had symbolically caused the 'paternoster', the conveyor belt in the slaughterhouse, to materialize. After all,the theme of his solo exhibition was the slaughtered, the dead animal." Hasenböhler's intensity, his application of paint and his force, but perhaps not so much his unconventional figuration, allow us to place his oeuvre in the context of the 'Neue Wilde', who at the start of the 1980s, were important in Basel as well.

Also in the 1980s, the Basel scene benefited from the opening of what was Europe's first public museum devoted exclusively to contemporary art: the Museum für Gegenwartskunst (now called Kunstmuseum Basel | Gegenwart). Contemporary art was and is not only exhibited there, but also purchased. Leiko Ikemura of Japan, who was living and working in Cologne at the time and can be said to have been part of that city's 'Neue Wilde' group, was given a solo exhibition at this museum in 1987, featuring 11 paintings and a remarkable 169 drawings, many of which had been purchased by Kunstmuseum Basel in the early 1980s or had found their way into its Kupferstichkabinett (Department of Prints and Drawings) as donations from the artist. This in-depth examination of Ikemura's oeuvre came about due to the efforts of Dieter Koepplin, then director of Kupferstichkabinett.

The exhibition New Wild Artists is thus to be seen as an excursion into Basel's local art history, following the trail of the 'Neue Wilde', who by explicitly harking back to their expressionist forerunners from the late 19th and early 20th century, revived a painting movement that has lost none of its relevance today.