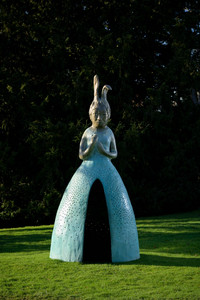 ‘I think the female figure, as imagined by male artists, is frequently an idealised version of the female form and is always seductive in some way... The way females naturally accept being modelled by conventions and social norms does not interest me.’

Born in 1951 in Tsu, Japan, Leiko Ikemura combines characteristics of European and Japanese art across drawing, painting and sculpture. Ikemura studied painting at the Academia de Bellas Artes in Spain before spending time working as an artist in Switzerland. In 1983 she moved to Germany, which at that time was dominated by Neo-Expressionism – a movement in which artists articulate raw emotions using vivid colours, instinctive mark-making, and distorted forms.

Ikemura began experimenting with expressive paintings that dealt with the difficulties of being female and a stranger in unfamilar places, exploring her own indentity and Japanese roots.

Since the mid-1990s, her works have depicted female figures which explore the innocence of childhood, relationships between mothers and children, birth and death. The central theme in her practice fuses human beings and animals into hybrid, mythical characters that often evoke feelings of both strangeness and familiarity.

Usagi Kannon II [Rabbit Madonna] is a bronze figure with rabbit ears and a crying human face, which is one of Ikemura’s most significant motifs. The character was first created in 2011 in response to the Fukushima nuclear disaster in Japan and the subsequent reported birth defects in animals.

The artist describes this hybrid creature as a symbol of universal mourning with its bell-shaped skirt acting as protective shrine. Questioning the cycle of creation and destruction, her work shares her concerns for the future of our planet at a time when natural habitats are increasingly under threat.